The origin of escape rooms: from the Etruscans to the bars of Tokyo 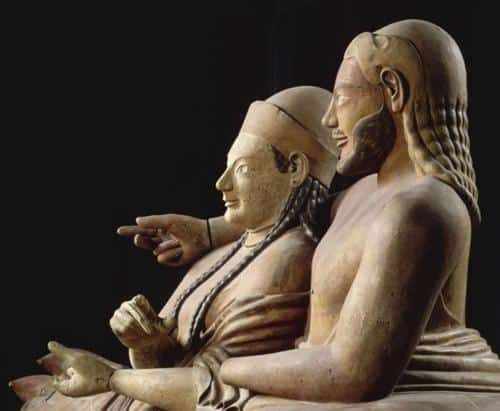 When it comes to the origins of escape rooms, the only name that comes to mind is Takao Katoe, who began creating group challenges in Tokyo bars in 2008. Despite the fact that few people know anything about him, the motivations that drove him to create this game are clear: "I wondered why interesting things never happened in my life, as they did in books. I thought I could create my own adventure, a story, and then invite people to be part of it." Takao's enthusiasm for novels and comics led to success in Asia, conquering Beijing, Shanghai, and Singapore, and then, with the help of a friend, Takao also conquered the United States, opening the first room in San Francisco. The concept quickly spread, and similar events began to emerge all across the world. The first landing in Europe occurred in Hungary in 2011, followed by Turin, Italy, in 2015. However, the link between the game and the escape is far older, dating back even to the origins of the games.

In his theory about the Etruscan people's origins, Herodotus describes the creation of the dice game, who devised it, and, most significantly, why they did it. The story takes place in Lydia, an ancient region in Asia Minor (Anatolia) near the contemporary Turkish provinces of Manisa and Izmir, during a catastrophic famine under the reign of King Atis. People who were left without food initially resisted, however when the situation did not change, they were compelled to discover alternative solutions. He then decided to utilize the sheep's astragals as four-sided dice, developing a simple game with simple rules: from then on, they would alternate a day to play the dice, a day to eat, and so on. The collective participation in the games managed to distract the population to the point of not feeling the shortage of food for entire days, allowing the population to exist for another eighteen years. After this period, King Atis chose to make his final move because the situation remained unaltered. He split the people in half and then drew lots to determine which half would stay in Lydia and which would go to search for another land. Those who survived, led by the same monarch Atis, were able to do so owing to the resources available. Tyrrhenian, Atis's son, went down to the sea with the remaining inhabitants and, after building boats, travelled to the west coast of the Italian peninsula, where he founded a new civilization, the Etruscan.

Although researchers continue to look for evidence of the famine and genetic ties between the Etruscans and Lydians, as with all of Herodotus' narratives, we cannot be certain of their veracity. In any case, we're more interested in the function of the game in the overall plot than the historical fact itself. The language used in the story is highly metaphorical and evocative, and the famine referred to could represent any kind of threat against which, as in the case of a pandemic, man has very few tools at his disposal: on the one hand, research to discover techniques suitable for defeating the evil; on the other hand, expectation, the hope to contain the phenomenon and limit the damage. Initially, the development of the dice game symbolizes just that: the use of already existing resources to create a new way to pass the time, keeping the body and mind active so as to avoid hunger and despair. A game to help you get away from suffering. The most intriguing aspect of this creation, however, is revealed in the story's epilogue. Time spent playing is not wasted time. In fact, we may assume that eighteen years of dice games have given the Lidi the opportunity to hone their problem-solving skills. The same skills that enabled Tirreno and his people to complete a long journey and thus save their culture.

All it takes is a little imagination to believe that escape room is not only an earlier idea than most people assume, but that it is also, in some respect, the first game ever conceived.

We use cookies on our website to give you the most relevant experience by remembering your preferences and repeat visits. By clicking “Accept All”, you consent to the use of ALL the cookies. However, you may visit "Settings" to provide a controlled consent.

This website uses cookies to improve your experience while you navigate through the website. Out of these, the cookies that are categorized as necessary are stored on your browser as they are essential for the working of basic functionalities of the website. We also use third-party cookies that help us analyze and understand how you use this website. These cookies will be stored in your browser only with your consent. You also have the option to opt-out of these cookies. But opting out of some of these cookies may affect your browsing experience.
Necessary Always Enabled
Necessary cookies are absolutely essential for the website to function properly. These cookies ensure basic functionalities and security features of the website, anonymously.
Functional
Functional cookies help to perform certain functionalities like sharing the content of the website on social media platforms, collect feedbacks, and other third-party features.
Performance
Performance cookies are used to understand and analyze the key performance indexes of the website which helps in delivering a better user experience for the visitors.
Analytics
Analytical cookies are used to understand how visitors interact with the website. These cookies help provide information on metrics the number of visitors, bounce rate, traffic source, etc.
Advertisement
Advertisement cookies are used to provide visitors with relevant ads and marketing campaigns. These cookies track visitors across websites and collect information to provide customized ads.
Others
Other uncategorized cookies are those that are being analyzed and have not been classified into a category as yet.
SAVE & ACCEPT